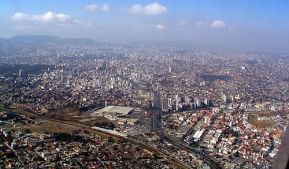 Both of the universities that are hosting the event, the UFMG and the PUC-Minas, are based in Belo Horizonte and offer Undergraduate and Graduate degrees in Law which emphasize philosophical subjects, figuring amongst the most traditional and well-assessed institutions in the country.

Belo Horizonte, with 2.375.444 inhabitants, is one of most beautiful, wooded and developed cities in Brazil. The city is representative of a republican worldview that found its place in Brazil in the beginning of the 19th Century, since it was built by the most republican of the presidents that Brazil has had in its History, whose name was Afonso Penna. Founded at the end of the 19th Century to be the capital of the State of Minas Gerais, it was the first planned city in the country and it is now Brazil’s third most populated city. The city is situated less than 100 Km from places of great historical, cultural and environmental interest, such as the colonial city of Ouro Preto (UNESCO World Heritage Centre), the Museum of Inhotim and the spelaean circuit of Minas Gerais.

The theme of the Congress will be Human Rights, Democracy, Rule of Law and Contemporary Social Challenges in Complex Societies. The choice of the theme is important, on the one hand, because the biggest challenge of developing countries such as Brazil is to reconcile their rapid economic development with the protection of Human Rights, and, on the other hand, because the developed countries are now facing criticisms against the model that they have historically imposed on the rest of the world. The scientific activities of the event will be distributed among the Plenary Sections, the Working Groups and the Special Workshops. The Plenary Sections will have 11 keynote speakers that will be invited by the organization of the event, as well as the IVR Young Scholar Prize. The Working Groups will specify and develop the general theme of the Congress. The Special Workshops, which will be proposed by the participants of the Congress themselves, will allow other topics to be discussed at the Congress. English will be the official language of the event. There may eventually be Special Workshops in other languages, as long as all its participants are able to communicate in such languages.